Hollywood actresses Felicity Huffman, Lori Loughlin and a slew of chief executives are among 50 wealthy people charged in the largest college cheating scam ever prosecuted by the U.S. Department of Justice, federal officials said Tuesday.

Those indicted in the investigation dubbed "Varsity Blues" allegedly paid bribes of up to $6 million to get their children into elite colleges, including Yale, Stanford, Georgetown and the University of Southern California, federal prosecutors said.

"This case is about the widening corruption of elite college admissions through the steady application of wealth combined with fraud," Andrew Lelling, the U.S. attorney for the District of Massachusetts, said at a news conference Tuesday.

"There can be no separate college admissions system for the wealthy and, I'll add, there will not be a separate criminal justice system either," Lelling added.

i also heard that some chinese students paid a company over $100k to dress up the application so they could get accepted into Harvard, but they were rejected so they sued and lost. 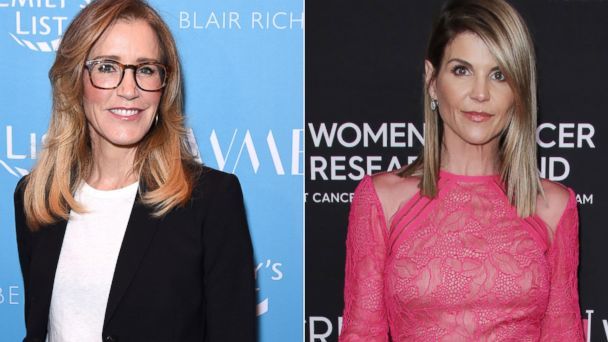 getting her eldest daughter accepted into Harvard is worth $6 million.

I'm not a feminist and i never had interest in feminism, i don't believe women are oppressed, and obviously some females like the daughters of these 2 grew up in immense wealth and privilege, and their mothers are willing to pay big bucks to get accepted into Harvard.

they don't need me being a feminist, reading feminist b.s crap advocating for them, while they vacation in the most exotic and expensive locations in the world. i got better things to do with my time.

but yeah growing up I was told the best college to get accepted into is Harvard, Bill Gates and Mark Zuckerberg went there

Harvard has the smartest kids in the nation and famous and very wealthy alumni, and that Harvard is a ticket to wealth and the ruling elite.

these 2 actress certainly believe it.

for better or worse, i read Allan Bloom's the Closing of the American Mind. in another book, he has an essay where he address Harvard students as fellow elitists.


there was no internet for me in the80s, with the apple 2c having 128k of memory

so i had no source of information on harvard

Allan Bloom in the Closing of the American Mind has his bio, he was faculty at Yale, Cornell and finally Univ of Chicago, all elite institutions.

and he addressed Harvard facutly as fellow elitists.

so I took what Allan Bloom, an actual Yale facutly as gospel. you need to be an elitist to be a harvard student.

since Allan Bloom hated rock music of beattles led zeppelin and michael jackson but loved mozart and beethoveen you have to prefer classical music over rock music.

and his book is chocked full of references to Niezsche Shakespeare, Kant Plato Aristotle.

so i thought Harvard students reference Niezsche or Kant or Milton in their conversations and in their essays.

i now know that's mostly b.s, though not at the same level as fundamentalist christian moody bible institute b.s

harvard students and faculty listen to rock music to beattles and led zeppelin.

and personally i prefer skywalker over shakespeare.

one thing i agree with allan bloom is the observation many harvard and ivy league grads claim to be socialist and left wing, while pursuing wealth for themselves. they claim to be anti-elitists while attending an elite university.

their parents are willing to bribe up to $6 million plus donations to get their children accepted into harvard, while claiming they are liberal democrat anti-elitists.

i suppose that's less obnoxious than allan bloom who is openly elitist. allan bloom was a snob who thought those who listen to rock music or didn't discuss shakespeare are inferiors and he is quite honest about this. allam bloom himself was a huge fan of plato and aristotle and niezsche, all of whom espoused elitism.