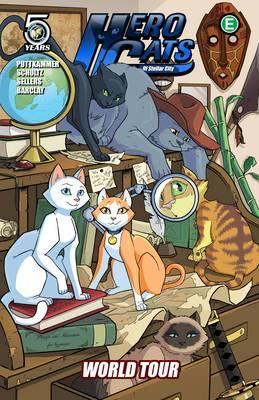 the first issue the hero cats arrive by hot air balloon to a cowboy western, board a train, train is robbed, hero cats intervene by attacking the train robbers

in the second issue, the hero cats arrive by an air plane, which crash lands in a jungle, they see elephans a native attacks a gorilla

in the third issue the hero cats arrive by boat to the Orient, to something like Japan, with the ninja clan.

i won't say i like the characters all that much, hiccup astrid et al

or the story all that much. i don't think it's all that funny like Kung Fu Panda

what i like about this show is the superior animation, superior graphics, and just the visuals they provide, of what it would be like to be riding a dragon and flying around.

to me that is just magical

for the most part i watch it when i'm eating, washing dishes, laundry or exercising and need something for eyes to feast on

with kung fu panda i actually stop what i'm doing and pay close attention, at least on the first watch. in addition to a lot of slap stick humor it has funny things like when poe had to take a measuring tape to get tigress height, and he did it hanging from a ceiling while tigress was sleeping. she woke up, saw poe hanging above her, poe smilying, next thing you see is tigress kicking poe then poe exploding out of the ceiling LMAO!

Dragons: Defenders of Berk vicarious is that i want a dragon and fly off to magical adventures and magical lands. sadly, dragons don't exist but still. fun for me to watch.