i'm checking the news, including white flower deaths and I find 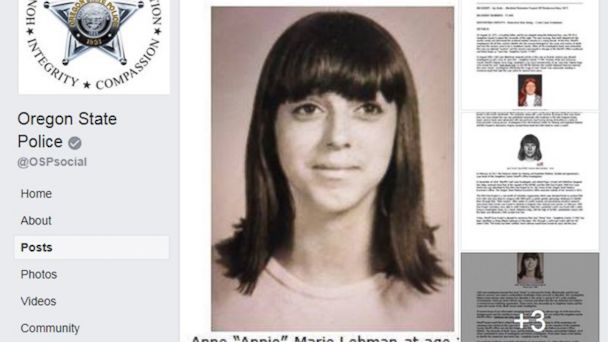 Friday, March 15th, 2019 12:45PM
After a teenage girl's remains were discovered in Oregon in 1971, her identity remained a mystery for decades.

Investigators worked to identify the girl, who became known as Jane "Annie" Doe, but were unsuccessful.

But thanks to DNA and genetic genealogy, officials have finally discovered who she was -- Anne Marie Lehman.

Now they're determined to learn how she died.

The mystery dates back to August 1971, when Lehman's scattered skeletal remains were found in the woods in Josephine County, Oregon, the Josephine County Sheriff's Office said Thursday.

Investigators exhausted their leads and the case was deemed inactive.

Then in 2004, a deputy made a clay facial reconstruction of the victim, nicknaming her Jane "Annie" Doe, the sheriff's office said. The image was released and leads came in, but the mystery remained unsolved.

In 2016, forensic isotope analysis -- which analyzes hair, teeth and bones to help determine likely geographic origin -- helped narrow down where Jane Doe was likely from and a new forensic drawing was released, the sheriff's office said.

Although she resembled a missing person in Massachusetts, investigators could not make a DNA match.

The break finally came in late 2018 when the DNA Doe Project became involved. The non-profit compares DNA from unidentified John and Jane Does to people who voluntarily submit their DNA to public genetic genealogy databases, the sheriff's office said.

"After weeks of careful analysis and painstaking ancestral research, Jane Annie Doe's family was traced to relatives in England, New Zealand and Canada," the sheriff's office said in a statement.

Then in February, DNA Doe Project volunteers told detectives a potential match was found with a sister in Washington state. Authorities reached out to the sister and got a DNA sample from her, confirming Lehman's identity, the sheriff's office said.

Jane Annie Doe was really Anne Marie Lehman -- who happened to be nicknamed Annie by her family, the sheriff's office said.

Anne Lehman, of Aberdeen, Washington, was 16 years old when she disappeared. Investigators believe went missing from Aberdeen in the winter or spring of 1971, the sheriff's office said.

Authorities are still working to determine how Lehman died and ask anyone with information to call the Josephine County Sheriff's Office.

"Some say Annie Lehman was a runaway and others feel she was abducted and traded to a criminal human trafficking organization," the sheriff's office said. "These claims, how she ended up in Josephine County and the cause and manner of her death remain under investigation."

Meanwhile, authorities are praising the work of investigators who they say tirelessly tried to solve the mystery of Jane Annie Doe.

"Forensic genetic genealogy is fast becoming the most powerful new tool for solving cold cases that have resisted all other approaches," the sheriff's office said. "Without the DNA Doe Project orchestrating the effort to bring Annie Marie Lehman home, it may well have taken another 47 years before Annie would be identified and reunited with her family."

The Oregon State Police in a statement said it's "extremely proud of the work performed by our Forensic Anthropologist, Dr. Nici Vance. Dr. Vance's unwavering dedication and tenacity to helping identify these remains and bring closure to families just like the Lehman's is inspiring."

I find this staggering on several fronts.

first is the time frame.

the identification was announced today, as i type this, Fri Mar 15, 2019

about the same time as my mom.

her body was found in 1971 and so for 47 years was unidentified. it was identified via

her DNA was badly degraded. sound familiar? that's of course what RDI claim about the DNA in The Unsolved Murder of JonBenet Ramsey

despite being badly degraded after 47 years this Jane doe from oregon was finally identified, her sister is still alive.

i'm amazed her sister didn't offer DNA and wondered what she was up to all these years, 47 years

so i'll ask the question i've asked before.

and identify a suspect with a perfect DNA match?

the other issue, i suspect some of the most famous unsolved jane does and john does in US history could be solved via DNA and genetic genealogy.

from the boy in the box to john wayne gacy victims to countless murdered jane does and john does, i suspect they can all be solved by DNA and genetic genealogy if the money were there.

I believe they are doing this for JBR. Why wouldn’t they be?

searchinGirl wrote:I believe they are doing this for JBR. Why wouldn’t they be?

i suspect they are, since this jane doe case i've never heard of,

i'm sure though there must be "failures" as well and they don't get reported, otherwise all the jane does and john does would be solved by now
_________________
If you only knew the POWER of the Daubert side

Do you think there would, or could, be any matches to someone whose lineage was from Tibet?

searchinGirl wrote:Do you think there would, or could, be any matches to someone whose lineage was from Tibet?

i originally heard the DNA is white european, but the documentary on A&E one DNA expert claims hispanic.

why do you think Tibet?

since the crime happened to a white girl and white family in the US i'm thinking probably white offender. second would be black, third latino.

Boulder has an assimilated culture of Tibetan Buddhism. Our sister City is Dushanbe. They built us a beautiful tea house. Naropa is here. So the question is does Tibetan DNA look different than Caucasian, or African American dna?

searchinGirl wrote:Boulder has an assimilated culture of Tibetan Buddhism. Our sister City is Dushanbe. They built us a beautiful tea house. Naropa is here. So the question is does Tibetan DNA look different than Caucasian, or African American dna?

Tibetan DNA show up as "Asian"

if correct, it's possible JB killer is foreign, and from Mexico or some southern american nation like venzuela or brazil

there was a news article where a court did not find Richard Eikelenboom to be a qualified dna witness however.

a concept RDI find unknown but you need the credentials, something RDI lack.

Thank you. It doesn’t appear as though there is a separate Asian classification population in the common dna databases. So I would guess their dna profiles are included with Caucasian’s. I believe Eikelenboom has brought his credentials up to US standards by now. He was kind of blind-sided in Court by Mitch Morrissey, who was also a consultant on JBR Grand Jury. Eikelenboom was able to get Timothy Masters out of jail. It cost the state $10M. If the perp is of Hispanic ancestry then he is more likely local. There are so many huge Hispanic families around here. I helped a friend of ours track down some of his family in New Mexico dating back as far as we could find, using land records.