i'm way behind on my blogging. so much happening.

growing up, the word on Mark Hammill Luke Skywalker was that he was a shitty actor. I didn't say this but I heard this from a lot.

That his gig was Star Wars and that his other acting appearances show he's a bad actor, so it was claimed.

in one scene they show a couple in France being burned at the stake for heresy, the cathars, a type of gnosticism

i wondered what character Mark Hammill was playing but i found Talus funny.

He in one scene said 7 chews, no less, no more, and when one initiate gave 8 chews he wrestled him and chocked him, 7 chews 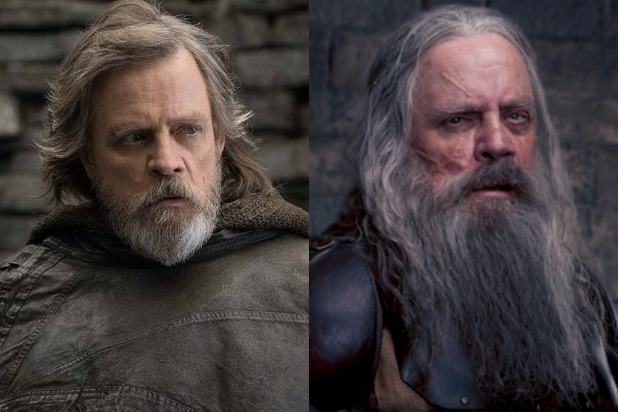 i actually think Talus is well done, Mark Hammill is a good actor after all. and the Jedi were patterned after Templars.

the idea of a warrior monk, a warrior, a knight, devoted to Jesus Christ. seemingly strange in the modern world where you just pick up a gun, but in this period, a sword it was seen to have faith in Jesus Christ to be successful militarily.

in some ways this is like the Christian version of Oriental Shaolin Monks.

The knights Templars believed you have to believe in Jesus Christ and they recited psalms and other scripture, believing it puts in contact with God, which then improves your fighting ability.

technically the king of France was also "Christian" and in the end he betrays and then wipes out the Templars.

his claim was that these Templars were heretics.

which reminds me, just a couple of weeks ago I told some people I have been taking my mom to church, on the hope that social interactions would be good for her Alzheimer's.

I told one person I got door rang by Jehvoah witness, and what one elderly church lady told me was that Jehovah Witnesses are not Christians. they have false doctrines.

yeah, in the light of Darwin and his theory of evolution and modern secular biblical scholarship and archaeology, the idea of false doctrines is b.s to me. i've also heard it claimed that from mormons to catholics to prochoice liberal christians and lgbt christians are false fake christians.

this is the modern world.

but in medieval times, Talus, played by Mark Hammill, was training the initiates, the hopefuls to be Templars, a great deal of Christian theology and the bible, quotes from Psalms and gospels and prayer, on the theory that this will make them powerful warriors in Christ.

today you just need to buy a gun, but then you needed extensive training in the sword.

they talked about how having christian beliefs and christian virtue resulted in a superior fighting force.

in the end all this god talk didn't save them from being wiped out by a fellow christian, king of france.

just like the jews were wiped out by hitler and the holocaust despite their torah and talmud study.

one of the initiates said he didn't understand all this emphasis on bible study and prayer, he just wanted to learn to fight and be a knight.

how is reciting psalms and prayer relevant to being a knight and fighting with a sword?

but it is part of the total lifestyle which included religion. there is a safety in numbers and since all the templars professed christianity and the bible, that bounded them in shared religious beliefs.

as i watch this i'm wondering who would win, the great heathen army of vikings led by ragnar lothbrook or ivar the boneless vs knights templars led by richard the lion heart, or even Talus. what did pagan vikings think of christianity, and battling them?

in today's world there's no need for special forces to learn the bible to be successful snipers for example.

overall i enjoy knightfall and i enjoy talus and mark hammill.

i used to play D&D and it seems to me that the paladins were modeled after Templars and other holy knights.

the templars were wiped out. and so to were the cathars. what would the world be like if either or both survived?